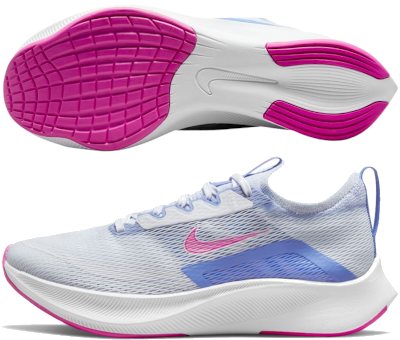 The powerful Nike Zoom Fly 4 hits the market following its older sister ZoomX Vaporfly Next% being the most notable difference between the two that the Zoom Fly 4 has the latest evolution of the React compound in the midsole while the ZoomX Vaporfly Next% has the exclusive ZoomX, something that is reflected in the sale price. Again, all those runners looking for a more "conventional" racing shoe within the Nike lineup, have the great Air Zoom Streak 7 available.

One of the most significant changes compared to its predecessor Zoom Fly Flyknit (also known as Zoom Fly 2) is to replace the hitherto premium fabric FlyKnit due to the new VaporWeave that offers greater support to sudden movements caused by running fast and improves its behavior against water. The laces are maintained throughout the instep and the oversized "Swoosh" logo extends from the outer face to the front. As a curiosity, the women's model has a higher arch and a softer insole to better adapt to the female physiognomy.

The midsole of the Zoom Fly 4 continues to be made of the latest evolution of the React synthetic compound (originally from the Epic React Flyknit 2) and maintains the desired carbon fiber plate, but reduces its drop from 10 to 8 mm for better dynamic behavior. For those looking for something in between, the American brand offers a midsole that combines ZoomX and React in the Zoom Pegasus Turbo 2. The sole is very similar to that of the ZoomX Vaporfly Next% shoe with a large piece rubber at the front and discreet reinforcements at the rear to improve traction and increase durability. Let's go for a run.