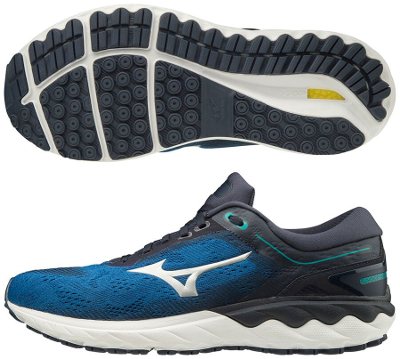 When you first see the new Mizuno Wave Skyrise you get the feeling that it is a Wave Sky 3 shoe, both in performance, weight and, of course, price. The next question would be: is it more similar to the Wave Rider 23 or the Wave Ultima 11? In short, many questions for a new shoe model.

As this is a new model the only reference seems to be the aforementioned Wave Sky 3 with whom it shares the concept of a fairly clean upper although with fewer ventilation holes and a rear part with a greater number of thermo-seals when looking for greater consistency. An oversized and well-fluffed tongue stands out, as does the collar around the ankle. As for the size of the logo on both sides, a contained size reminiscent of that already seen on the Wave Horizon 4 shoe is imposed.

No doubt the most interesting thing about the Wave Skyrise comes in a midsole that adopts the 10 mm drop of the model it is inspired by. The construction, despite following the Foam Wave configuration, in this case is slightly different from that featured in the Wave Sky 3, cutting the amount of lighter and softer U4ic™ in the rear upper in favor of a greater amount of firmer U4icX™ which is the majority compound. The novel XPOP is still embedded in the central part and visible through the outsole, but as with the U4ic™, the amount is reduced to the rear only. The outsole maintains the central rib that runs it from one end to the other but it is surprising to see only three large flex grooves in the forefoot, a design reminiscent of the Japanese brand's classic from when the shoes use the famous Wave™ plate as in its pronator alternative Wave Inspire 16 shoe.