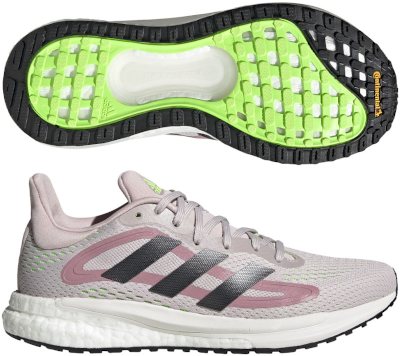 It is confirmed that Adidas maintains the traditional numbering with the Adidas Solar Glide 4 while in other models of the German brand such as the Ultra Boost 21 the last two digits of the year are used, curious at least. Be that as it may, the Solar Glide 4 is positioned as a relatively "conventional" shoe within the specific collection for runners looking for abundant cushioning for relatively long rides. In another time it would be the entry step to the segment but seeing the retail price, as if to be frivolous.

Surely for those who only take a quick look it will be difficult to distinguish them from the previous edition Solar Glide 3 and it is that the (typically minimal) annual renewal makes less and less sense when In addition, brands try to boast of sustainability. The mythical Adidas "3 stripes" are heat-sealed on both sides of the shoe on a double-layer mesh (Primegreen) in an exercise that is not only theoretical in personality but also practical to give a greater consistency to the whole. The stitched reinforcements ("Tailored Fiber Placement") on the sides have disappeared and the characteristic elevation on the back (S-Curve) has been slightly redesigned for Achilles protection.

The rest of the Solar Glide 4 stays the same with the Boost™ compound less and less present (the LightStrike and its variations is what it is beginning to be seen in other Adidas shoes such as the mixed Adizero Boston 10) and with the striking side rails that together with the mythical Torsion system (not visible from the outside) provide good stability, do not forget that there is an almost identical version (ST) with specific reinforcements for pronators. The sole does not change either the evolution of the StretchWeb concept or the collaboration with the prestigious tire manufacturer Continental™ as a technological partner that guarantees the quality and performance of the rubber used. Let's go for a run.