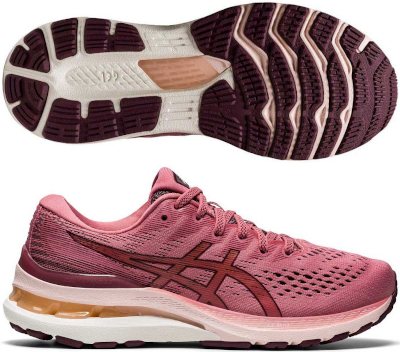 There is possibly no other shoe specifically designed for running like the Asics Gel Kayano 28 that is the first choice for pronator runners looking for the most cushioning possible and that price wise they are not cheap at all, so all indications are that they are worth what they cost. Small changes and the best in technology keep it a step above the great GT 2000 9 and a couple of the also-accomplishing (and more affordable) GT 1000 9. An interesting catalog within the pronation control shoes.

There is no major revolution compared to its predecessor Gel Kayano 27 but there are interesting changes. The upper has a modern and attractive design, very clean where only the iconic Asics heat-sealed logo stands out. The forefoot features quite a few ventilation holes but it doesn't seem enough to compensate for a very fluffy tongue and a rather bushy upper. Visually it highlights the external part of the heel counter which undoubtedly brings an extra touch to improve stability.

In the midsole Asics Gel Kazano 28 highlights the incorporation of the FlyteFoam Blast™ compound replacing the FlyteFoam Propel™ layer, which promises a softer feel and better responsiveness. The rest of the midsole remains basically the same with a not visible from the outside Gel® unit in the forefoot and the rearfoot slightly modified, but giving that feeling that every time you strike your heel it feels like stepping on squishy clouds. Stability relies on the well-known dual-density combination (Dynamic DuoMax™) with a piece of plastic (Trusstic™) that in this edition has been placed between the different midfoot cushioning layers to provide enhanced rigidity to the whole. The outsole is pretty much the same, though it improves flexibility with more flex grooves in the forefoot (not as stylish as in its neutral sibling Gel Nimbus 23) for a smoother, quicker transitions. Let's run.